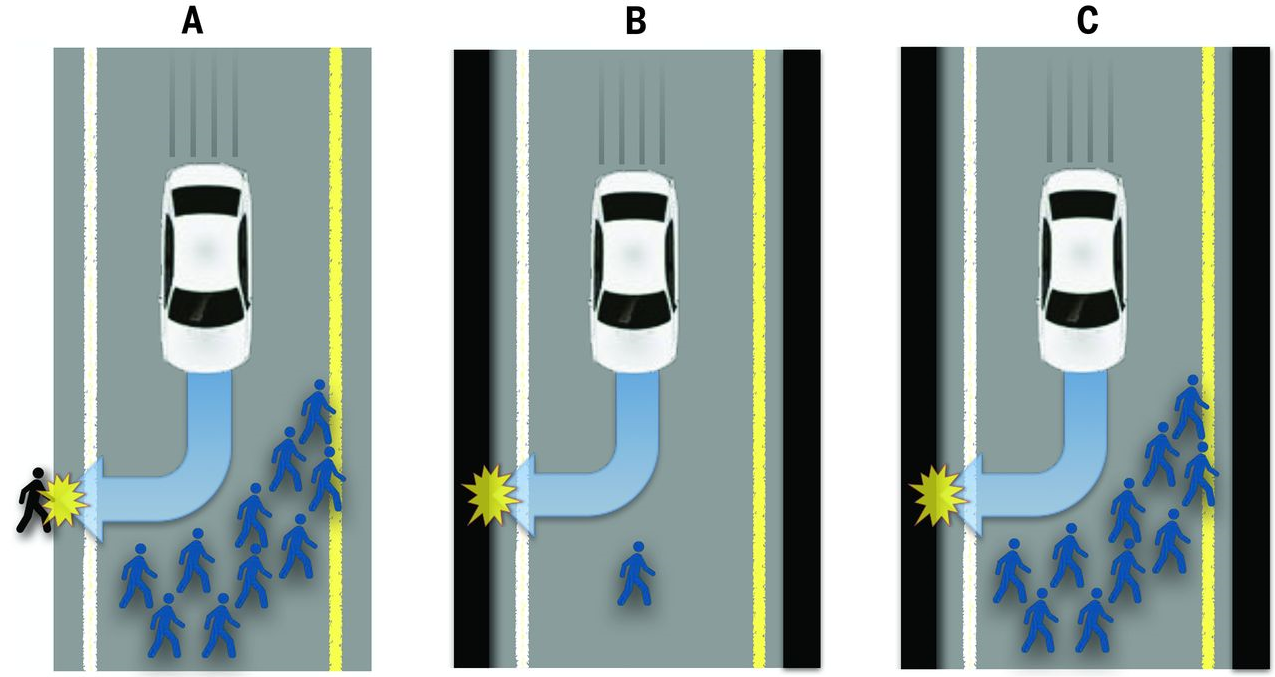 A recent study in Science “The Social Dilemma of Autonomous Vehicles” has highlighted how self-driving cars need to have algorithms to decide on actions in extreme situations – and even having to choose between protecting the passengers vs. pedestrians.  The study results indicate that participants favor minimizing the overall number of public deaths even if it puts the vehicle in harm’s way.  But when asked about which cars they would actually buy, participants would choose a car that would protect them first.  This study highlights an apparent conflict between morality and autonomy.

I like the study, as it raises good questions, and it describes part of one of the many issues in autonomous vehicles.  I also like the many news articles that have been written on this topic based on the study, as it helps raise awareness of the complexity of the issue – that it is both social and technical.  At the same time, for the sake of being newsworthy, and controversial, most narratives I read on the topic frame the study and topic as a social dilemma.  Yet when examined through a technical perspective, we will have dramatically safer situations for both passengers and pedestrians with autonomous vehicles, and there isn’t any dilemma.

Traffic related death rates are over 1.25 million deaths worldwide per year, and with aging drivers, distracted driving, higher speeds, prevalence of substance abuse all contributing to stubbornly keep the rate high.  For every person killed in a motor-vehicle accident, 8 are hospitalized and 100 are treated and released from emergency rooms.  Autonomous driving, when implemented well, will easily reduce this by 90%, and perhaps by 99% when fully implemented.   The response time, sensing, spatial awareness, decision-making, and reliability of an autonomous vehicle will be better than most of us, except perhaps for highly trained and talented drivers, and definitely infinitely better than too many of our driving population that cause most accidents (distracted, drunk, inexperienced, tired, reduced reflexes, etc.).  The autonomous capability allows us to have a safer response for both the passenger and pedestrian.

Consider that the autonomous vehicle can respond faster than most humans.  I have the lane departure warning system on my car, and it is much faster than me.  An autonomous vehicle will be able to brake faster, more optimally, and steer a better adaptive path that is more likely to minimize injury to both passenger and pedestrian.  Most drivers can’t brake as fast, or optimize the braking pressure, or optimize the steering adjustments during the emergency maneuver as well as a well-implemented autonomous vehicle.  The following picture shows a better braking and adaptive steering path with the best overall outcome for both passenger or pedestrian.  In the event of a collision, the overall speed, impact angle, etc. will be reduced. 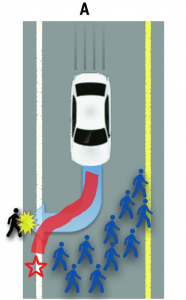 With autonomous vehicles, there will still be accidents, and there will be cases where it will be determined that the autonomous vehicle did not make the best decision.  But the overall absolute level of safety will go up so dramatically, that the question will not be “isn’t this the wrong car to buy because it may decide wrongly in an extreme case?” but “isn’t this the right car to buy because it is overall so much safer for me and everyone else?”.  The moral path is to embrace autonomous vehicles, and work towards a proper system design and implementation in industry, government, and with consumers.