Vancouver/BC has become a leading Clean Energy Innovation Cluster in several Technologies/Industries, despite many challenges:

The medium and long term Policy and Business Case for Clean Energy is compelling, according to the IEA, and is summarized in their IEA Energy Technology Perspectives 2012. A summary excerpt chart is below: 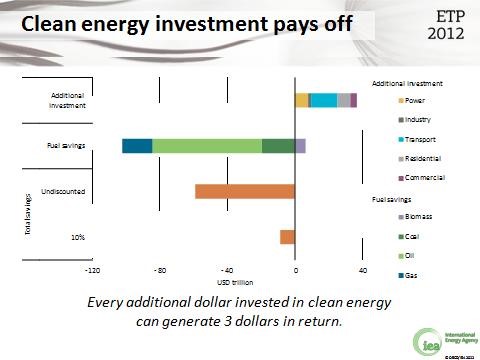 Governments and Industry worldwide are collaborating and competing for business, projects, and products, and Clean Energy clusters are a big part of that.

Within the Vancouver/BC Cluster, examples of world leading Clean Energy technology companies in Vancouver include Westport, Ballard, and AFCC/Mercedes-Benz Fuel Cell.  These companies are all acknowledged global world leaders in their sector, and all continue to attract significant Foreign Direct Investment from big OEM multinationals.  There are many emerging or established small Clean Energy companies in Vancouver as well – dPoint Technologies, Endurance Wind Power, and Greenlight Innovation – to name a few.  The BC Energy companies, such as BC Hydro or Fortis, are players in many Clean Energy projects.  The BC Consulting Engineering companies all have Clean Energy services.  The BC Government has laid out a near term strategy, including a recent focus on LNG (which is one of the cleaner fossil fuels, though still has a medium carbon intensity).

So, what are the four key ingredients for Vancouver/BC?

Though self-evident the most critical ingredient is the competition.  The core technology/product/project in Vancouver/BC must be extra competitive to prevent the host OEM/funding organization from doing the development in their backyard, or with their own internal resources.

In closing, Clean Energy is a both a collaborative and a fiercely competitive sector; and with the right strategy, Vancouver/BC developers can be successful players.